Having exhausted our incredulity glands and satire organs yesterday while discussing the possibility that the Biden administration will appeal the ruling that struck down the mask mandate for public transportation, we choose to just report the news and nothing but the news today.

The CDC has asked the Justice Department to appeal a judge’s ruling that threw out a mask requirement for plane and air travel, setting up a court battle over the decision.

“CDC believes this is a lawful order, well within CDC’s legal authority to protect public health,” the agency stated.

DoJ had said Tuesday that it stood ready to appeal the ruling, issued Monday by a Trump-appointed federal judge in Florida, but that it would do so only “subject to the CDC’s conclusion that the order remains necessary for public health.” 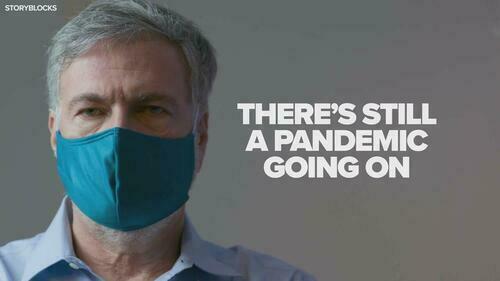 The full statement from The CDC reads as follows:

It is CDCs continuing assessment that at this time an order requiring masking in the indoor transportation corridor remains necessary for the public health.

CDC will continue to monitor public health conditions to determine whether such an order remains necessary. CDC believes this is a lawful order, well within CDCs legal authority to protect public health.

CDC continues to recommend that people wear masks in all indoor public transportation settings. CDC’s number one priority is protecting the public health of our nation.

As we have said before, wearing masks is most beneficial in crowded or poorly ventilated locations, such as the transportation corridor.

When people wear a well-fitting mask or respirator over their nose and mouth in indoor travel or public transportation settings, they protect themselves, and those around them, including those who are immunocompromised or not yet vaccine-eligible, and help keep travel and public transportation safer for everyone.

Forget all those videos showing cheering passengers… and screw all those airlines who made the decision – based on their customers demands – to lift the mask mandate… and ignore for one moment that there is no ‘science’, other than ‘political science’ behind the mandate for mask-wearing.

Presumably, it is simply the fact that some ‘freedom‘ was given back to the American public that was just unacceptable.

For all the blue-checks whose bloviation is so grandiosely amplified among the echo chambers of Washington, remember: “you are free to wear masks if you like… if they work, they will protect you, if they don’t why mandate them?”

In the meantime, which airline will panic and signal all their virtue by re-mandating mask-wearing based on this CDC decision?

We give the final word to Bill Maher who dropped some ‘science’ about vaccinated mask-wearers during a recent Real Time segment.

“I don’t understand these people,” Maher said, adding “They say they’re going to continue to wear masks even after they sound the all-clear. It’s like having sex with a condom and then saying, ‘You know what? I think I’m going to leave it on for the rest of the night.’”

He went on to explain “you’re never going to have a 100% COVID free atmosphere… there’s always going to be variants, we just have to live again.”

It's #CaliforniaReopening Day! Some vaccinated folks say they’re going to continue to wear masks even after they sound the “all clear.” It’s like having sex with a condom, and then saying, “You know, I think I’ll just leave it on for the rest of the night." pic.twitter.com/nMaiwdDK3t