Update(1130ET): As the EU attempts to impose unity amid the still fast escalating gas for rubles standoff and potential full-blown energy crisis, Germany has said for the first time it is ready to back a ‘gradual ban’ on Russian oil.

As detailed in a breaking Bloomberg report, “Berlin would support a phased approach to targeting oil rather than some of the other options that have been discussed, such as a price cap or payment mechanisms to withhold parts of Moscow’s revenue, according to people familiar with talks among EU ambassadors.”

“The ban would also need to come with a transition period, said the people, who asked not to be identified because the negotiations are private,” the report adds, which is akin to the EU strategy when in banned coal earlier in April.

Meanwhile, after European Commission President Ursula von der Leyen upon the start of Wednesday charged the Kremlin with trying to fracture Europe’s response with “blackmail” – Moscow has rolled out a few more tricks of its own amid Germany’s signaling a change of posture regarding Russian energy it’s population is so heavily dependent on…

“Russia’s major gas bank rejected a payment from a trading firm that Germany seized from Moscow’s control, the first sign of friction following the take-over amid a broader regional energy dispute,” according to Bloomberg.

Gazprombank is indicating it rejected some April and May gas deliveries payment – even though it was made in rubles per Russia’s firm request – on the basis that the German government previously took over Gazprom PJSC’s German subsidiary as part of sanctions enforcement.

Update(0918ET): Is Europe starting to panic amid cracks in a ‘unified European front’? It appears so, based on a press briefing in Brussels by European Commission President Ursula von der Leyen, who said:

“Its’ very clear and the request from the Russian side to pay in rubles is a unilateral decision and not according to the contracts,” and further “Companies with such contracts should not accede to the Russian demands. This would be a breach of the sanctions so a high risk for the companies.”

She also denounced this “as an instrument of blackmail” after the Gazprom suspension of gas to Poland and Bulgaria. “This is unjustified and unacceptable,” she said earlier in the day. “And it shows once again the unreliability of Russia as a gas supplier.”

It appears that Putin’s gambit is working.

One day after Russia halted natgas supplies to Poland and Bulgaria due to “nonpayment in rubles”, confirming that the country is willing to go ahead with its bluff and shut down supplies to “unfriendly” nations and sending European nat gas prices soaring, Bloomberg reports citing a person close to Russian gas giant Gazprom, that already Europe’s fake united front is cracking as four European gas buyers have already paid for supplies in rubles as Russia demanded even as further cutoffs if others refuse the Kremlin’s requirement aren’t likely until the second half of May, when the next payments are due.

While it was unclear which are the four companies violating EU directives and paying directly in rubles, according to Reuters Germany’ Uniper and Austrian OMV are among the companies that have folded to Kremlin’ demands:

Pro-Russian EU member Hungary, meanwhile, has struck a deal to pay into a euro-denominated account with Gazprombank, which in turn will deposit the amount in roubles to Gazprom Export, foreign minister Peter Szijjarto said in a video posted to Facebook. Its next payment is due on May 22, he said. Slovakia has reached the same agreement, he added as more of Europe realizes that it is impossible to live without Russian energy sources.

Separately, to facilitate their compliance with Russian demands (and ostensibly in breach of European sanctions), ten European companies have already opened the accounts at Gazprombank needed to meet President Vladimir Putin’s payment demands, the person said, speaking on condition of anonymity to discuss confidential matters.

As we reported yesterday, Russia halted gat supplies to Poland and Bulgaria on Wednesday after they refused Gazprom’s proposed mechanism for ruble payments, which the gas giant says does not violate European Union sanctions. Russia supplies gas via pipelines to 23 European countries. Moscow demanded that it be paid in rubles for nat gas shipments after the EU imposed sanctions on Russia over its invasion of Ukraine. However, the EU told member states that the mechanism the Kremlin proposed, which required opening euro and ruble accounts with state-controlled Gazprombank, would violate the sanctions. It appears that to at least 10 energy companies, complying with Russian demands to keep the gas flowing is more important than potentially pissing off some Eurocrats.

According to the FT, Gazprom Export notified Bulgargaz and PGNiG of the suspension of gas supplies from April 27 until payment is made in accordance with the decreed procedure, the company said. It warned that the unauthorised withdrawal of gas volumes transiting through Poland and Bulgaria to other European countries such as Germany would result in a reduction of transit supplies.

“Bulgaria and Poland are transit states,” Gazprom said. “In the event of unauthorized withdrawal of Russian gas from transit volumes to third countries, supplies for transit will be reduced by this volume.”

In response to the “unexpected” supply halts, which infuriated EU president Ursula von der Leyen, who today tweeted that “Gazprom’s announcement is another attempt by Russia to blackmail us with gas” adding that Europe is “prepared for this scenario” although judging by the scramble by several energy companies to pay in rubles that is not really true…

Gazprom's announcement is another attempt by Russia to blackmail us with gas.

We are prepared for this scenario. We are mapping out our coordinated EU response.

Europeans can trust that we stand united and in solidarity with the Member States impacted.

… European gas prices rose by 20% on Wednesday. Futures contracts tracking Europe’s wholesale gas price advanced almost by a fifth at €117 per megawatt hour in early trading. Prices are almost seven times higher than a year ago.

“Gazprom has completely suspended gas supplies to Bulgargaz (Bulgaria) and PGNiG (Poland) due to non-payment in roubles,” Gazprom said in a statement on Wednesday.

While we already know that at least a handful of European energy buyers folded to Russian demands, multiple European buyers have refused to pay in roubles (for now), saying it contradicted contract terms and would be a way to bypass EU sanctions on the Russian central bank.

“Politically, this raises the stakes for the EU Commission’s decision on whether the new payment system would violate sanctions and, hence, will probably keep market volatility elevated,” said Goldman Sachs analyst Samantha Dart in a note to clients. She also added that it is Goldman’s “view that it is in the interest of both the EU and Russia to work out a solution that brings gas payments in compliance with the EU’s legal requirements, consistent with recent comments from Brussels.”

Today’s events can work as an added incentive for the EU, and especially Germany, to find a way to work out a RUB payment mechanism given the significant economic toll a halt in gas flows would have in the region, which would be much greater than that of Poland or Bulgaria.

Well, it appears that in lieu of a political resolution, at least some companies are taking matters into their own hands, a development which will either escalate tensions further and lead to even more draconian measures, as the following Reuters quotes suggests:

… or force Europe to realize that full sanctions of Russian energy are impossible and force politicians to find loopholes, as this next Reuters headline signals:

To be sure, in a worst case scenario, Goldman warns that “a full interruption of Russian flows to Germany would potentially lift European gas prices to over 200 EUR/MWh this summer.”

Given all of this, it appears the Ruble is no longer “rubble” after all, trading at 6-month highs versus the dollar… 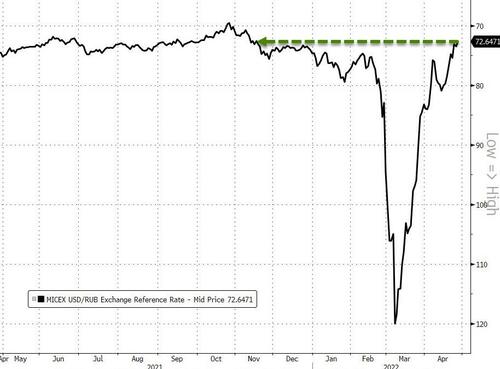 And near two-year highs against the euro… 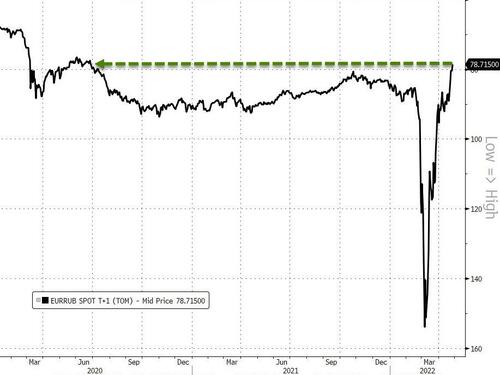 Just remember, Janet Yellen said this was all manipulation and told you that “you should not infer anything” from the value of the ruble.