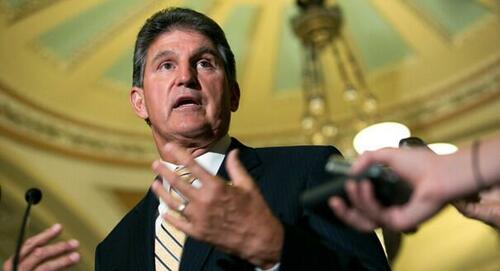 “We must be honest about the economic reality America now faces if we want to avoid fanning the flames of inflation,” he said in a statement. “At its core, the purpose of reconciliation is to get our economic and fiscal house in order. Contrary to foolish talk otherwise, America cannot spend its way out of debt or out of inflation.”

The bill, the “Inflation Reduction Act of 2022” is scant on details, though Manchin says the bill will “cut the inflation taxes Americans are paying, lower the cost of health insurance and prescription drugs, and ensure our country invests in the energy security and climate change solutions we need to remain a global superpower through innovation rather than elimination.”

As WaPo notes, “The measure also is expected to include provisions that aim to lower prescription drug costs for seniors, impose minimum taxes on corporations and raise money to lower the federal deficit.”

“For too long, the reconciliation debate in Washington has been defined by how it can help advance Democrats political agenda called Build Back Better,” said Manchin. “Build Back Better is dead, and instead we have the opportunity to make our country stronger by bringing Americans together.”

However, it's a blow for Democrats hoping to have child care, paid leave, or a child tax credit extension included in the reconciliation bill. This will be far smaller than Build Back Better, particularly on the social spending front.

When you spend another trillion dollars to hand out to special interests & buy votes and call it “inflation reduction” pic.twitter.com/dHc6QdBEtg

The announcement opens the door for Democratic lawmakers to begin work as soon as next week to advance parts of President Biden’s agenda that have been stalled for seven months.