Having seen the mainstream media rush to defend a clearly weakening economy, closing the ‘Overton Window’ on any mention of the ‘r-word’ – to the extent that one senior economist was fact-checked by Facebook for daring to utter the ‘r-word’ – pocaster Joe Rogan blasted the Biden administration for “gaslighting” the American people about the meaning of a recession after two consecutive quarters of economic contraction were reported last week. 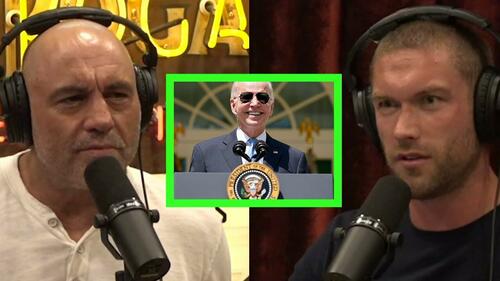 During a podcast with Chris Williamson, the pair turned to the topic of the recent quarterly gross domestic product (GDP) report and the efforts of President Joe Biden’s entire administration (and every mainstream media useful idiot and tenured ivory tower economist) to deflect the recession label.

Rogan criticized the administration for tampering with the definition of the word “recession,” and claimed that politicians were “gaslighting” the American public by denying the label.

“People think that [the word recession] is trivial, ’cause they are talking about this economic downturn, but it’s not trivial, because we’ve always used that term ‘recession,’ and we’ve always used that term to define whether or not the economic policies that are currently in place and whether or not the management in the government has done a good job of making sure that the economy stays in a good place,” Rogan said.

“They definitely haven’t done that, so in order to escape that sort of distinction, they’re literally changing the definition, which is terrible, and it should be pushed back against in a big way. It should be something that people get angry about.”

Williamson appeared to agree with Rogan, arguing that changing the definition of recession served only to distract from the hard economic reality and to protect the political interests of the Democratic Party.

“The bizarre thing about the recession situation is the fact that it doesn’t matter what you call it. You can call it … ‘paradise’ if you want, but it’s still [expletive], and all of the criteria of what’s happening indicates a recession,” Williamson said.

“The reason, obviously, is that you’ve got midterms coming up, and you need to make sure that ‘is in a recession’ is something that can’t be thrown at the Democrats.”

Watch the full discussion below:

And finally, don;t let the administration and its prancing ponies ‘gaslight’ you again that strong jobs data ‘proves’ we are not in a recession. First things first, as we detailed here, jobs are the most lagged signal of a recession; and second, under the hood of today’s “great” jobs data, we find that the surge in jobs was driven by individuals taking on multiple jobs – which hit a record high.