The last time we heard from Morgan Stanley’s chief US equity strategist Mike Wilson one week ago, he was plumbing the depths of bearishness (as much as Morgan Stanley would permit him of course: as we have long noted, Bank of America’s own in house “Michael” strategist –  that would be Hartnett – has been far more bearish), and he concluded that soaring inflation is no longer a positive catalyst for either earnings growth or stocks, to wit: the “positive effects of inflation on earnings growth have reached their peak and are now more likely to be a headwind to growth, (particularly as inflation forces the Fed to remain uber hawkish) and in that context, the growing rise in back end rates is having a meaningful impact on interest rate sensitive areas of the economy and market, like housing and impacting stocks.”

That said, Wilson was still unwilling to go “full bear”, and as had commented in his notes for a while, he expected defensives to dominate in this late cycle environment (that said, Wilson conceded that “the overall index remains a bit of a mystery with the P/E down only 11% in the face of a 120bps move in 10-year yields”) as he believed that the incredibly strong flows into equity from asset owners (both retail, pensions and other endowments) had made a decision to abandon bonds in favor of what is – for now – viewed as the better inflation hedge (namely stocks) would continue.

It is these flows which Wilson said are “keeping the main index bid and more expensive thereby leaving the real message about growth at the sector level”, and is also why the bearish strategist remained bullish on defensives as the message from the market was, to Wilson, “crystal clear” and in line with his own bearish view—i.e., growth is slowing and “likely more than most forecasts incorporate, especially for 2023 when the risk of recession has increased the most.”

So fast forward to today when in his latest Weekly Warm-up Note “Harder to Hide as the Bear Gets Grisly” (available to pro subscribers in the usual place), Wilson drops all pretense of “cautious optimism” and turns all-in bear, writing that “with defensive stocks now expensive and offering little absolute upside, the S&P500 appears ready to join the ongoing bear market” and while his (formerly) favorite sector, defensives, can still outperform, he warns that it’s just a relative trade at this point. Finally, while inflation may well be peaking, he doesn’t view this as bullish, “because it means margins & EPS have peaked too.”

Digging into the note, Wilson first explains why he no longer believes defensives are a clear outperformer, for the simple reason that it is now “harder to hide.” As the strategist shows, “over the past 12 months, the US equity market has provided plenty of opportunity to investors in certain areas even as the major averages have traded flat to down (SPX +2%, DOW -1%, NDX -4%, RTY -15%). However, one needed to be nimble and trade it well.” Here, Wilson pats himself on the back for correctly calling the market inflection points on the Morgan Stanley Fresh Money Buy List, which has dramatically outperformed the S&P in the past year:

As equity strategists, our primary job is to help clients find the best areas of the market at the right time, since beating the averages is the name of the game. Our sector and style preferences are reflected in our Fresh Money Buy List, which closely follows those recommendations. Over the past 12 months, that list is up nearly 19%, or 15% above the S&P 500.” 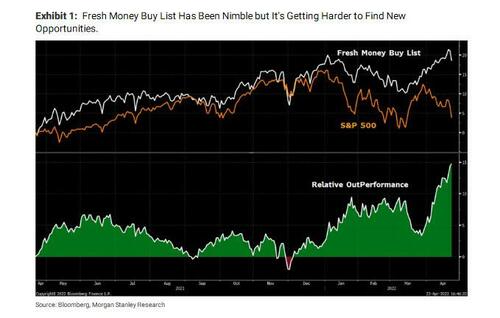 With that said, Wilson admits that “unfortunately, we now find ourselves at a bit of a loss for new ideas. In short, the market has been so picked over at this point, it’s not clear where the next rotation lies.”

This is a problem because in his experience, when there are no more clear rotations, “it usually means the overall index is about to fall sharply with almost all stocks falling in unison.”

If that sounds dramatically bearish, well it is… to an extent, and as Wilson admits, this is what he – and Zero Hedge too – has been waiting for as his Fire and Ice narrative concludes — a fast tightening Fed right into the teeth of a slowdown (something we also discussed yesterday in  “There’s A Growing Consensus The Fed Will Keep Going Until The Market Breaks“).

And while Wilson’s “defensive” posture since November had worked well, he can’t argue for absolute upside anymore for these groups given the major re-rating they have experienced in both absolute and relative terms, which he views as “another sign that investors know what’s coming and are bracing for it the best they can by hiding in such stocks.” 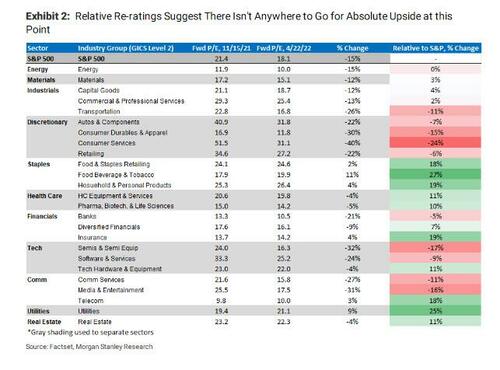 In terms of timing, Wilson looks to the “accelerative” (to the downside) price action on Thursday and Friday which he says supports the view that we are now entering this “much broader sell-off phase.” Friday, in particular, appears indicative of what to expect next — lower beta/defensive stocks outperform but they still go down.

Another important signal from the market lately is how poorly Materials and Energy stocks have traded, particularly the former. Some of the reversals in the base metals stocks have been eye popping, with most securing outsized reversal patterns on a weekly basis. To Wilson, “this signifies the market’s realization that we are now entering the Ice phase, and that growth will be the primary concern for stocks from here rather than inflation, the Fed and interest rates.”

And speaking of inflation and interest rates, Wilson – who last week said inflation had hit a level that was now destructive to stocks and EPS growth  – believes inflation and inflation expectations have likely peaked (we disagree), and he says that while others have been using this as a bullish argument, Wilson would like to send a clear warning—be careful what you wish for: “There’s no doubt that a fall in inflation should take pressure off the back end of the rate curve, which arguably could relieve pressure on valuations for some stocks. The problem is that falling inflation comes with lower nominal GDP growth and therefore sales and EPS growth, too. For many companies it could be particularly painful if those declines in inflation are swift and sharp. The move in some of the aforementioned Materials stocks suggest that’s exactly what could be in store for commodity prices. In other words, the Morgsn Stanlty strategist says that “the Energy and Materials names could be in for a period of underperformance after being one of the big winners of 2022.”  Here we disagree again, because a far more accurate take of what is coming to commodities can be gleaned from reading the latest Goldman and Zoltan Pozsar notes which are extremely bullish on both commodity prices and equities.

Yet aside for a few modest disagreements, we find it much more interesting that for Wilson the bottom line is that we “we are at an important inflection point for inflation, the mirror image of our call in April 2020 to look for higher inflation when we were at the trough of the COVID recession.”  At that time Wilson suggested inflation would be a big part of the next recovery given the nature of the stimulus—i.e., helicopter money — at a time when supply would be constrained. He also thought this would lead to extremely positive operating leverage and earnings growth (something we also noted at the time). Fast forward to today and that’s where we are.

The question now is will that last remaining positive tailwind continue or will it turn into a headwind for earnings growth? Wilson’ view is that it will be more of the latter for many sectors and companies and this is why he had been positioned in defensives and/or stocks with high operational efficiency. In other words, the stock market seems to be foreshadowing the peak in inflation and a tougher earnings environment overall. 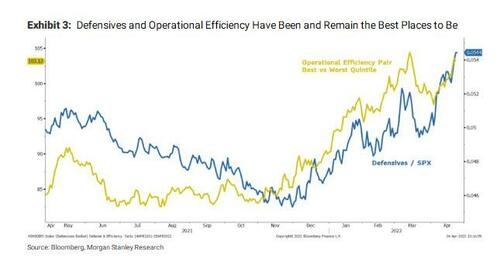 To Wilson, this all lines up with Wilson’s “hotter but shorter cycle”  analysis that compares the current period to the immediate post WWII period in the 1940s. As a reminder, the explosive spike in inflation during that era was quickly followed by a sharp decline. The result was a classic boom/bust that most investors do not seem prepared for even though the stock market internals appear to be strongly signaling that’s exactly what’s about to happen.

Furthermore, and this is why Wilson sees the bear market turning full grizly, if the stock market is about to experience a more significant decline at the index level during which there are very few places to make positive returns, it will simply feed the  disinflationary forces described above. If it gets bad enough, it could even feel deflationary for many segments of the economy where discounting returns. This, Wilson warns, “will show up via margin pressure and earnings misses.”

Finally, Wilson pre-empts one of the obvious counters to his latest views, namely “if inflation and growth is decelerating sharply, doesn’t that mean a return to the secular growth companies that can easily carry the overall market?” Here Wilson notes that while normally he would say yes, but this time many of the secular growers are also vulnerable now to earnings disappointment due to the pay back in demand for many of the goods and services offered by such companies. In our other words, these companies likely benefitted more than average from the COVID dynamics. Therefore, they will not be immune to the bust in growth as they normally tend to be. In fact, they could be worse off. Keep in mind that the COVID recession was unusual due to the lock-downs and work/stay at home phenomenon. As such, Wilson believes that Y2K may offer a better road map on what to expect next. While he will share the analysis in a future note, as a spoiler alert, Wilson writes that he anticipates a mild recession in technology spending (both consumer and corporate) even as the overall economy avoids one (here, we most certainly disagree). Yet even this cautiously optimistic does not bode well for the majority of secular growers that drive the overall index – recall the FAAMG names alone accounted for a quarter of the S&P’s entire market cap not too long ago – and it is especially negative for non-profitable ones in Wilson’s view.

There is much more in the full Michael Wilson note available to pro subscribers.